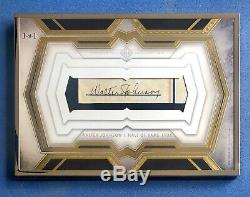 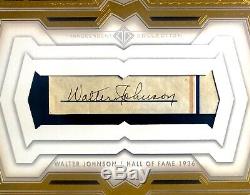 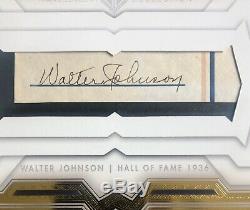 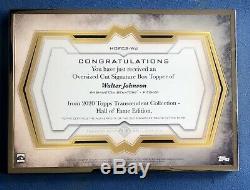 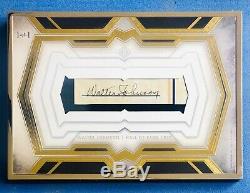 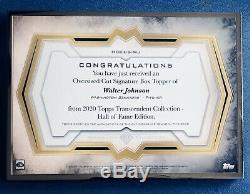 WALTER JOHNSON 2020 TOPPS TRANSCENDENT DUAL CUT AUTO 1/1 HALL OF FAME, CLASS OF 1936. What Babe Ruth was to batting, Walter Johnson was in pitching. Considered by some as the best ever, Johnsons name is all over baseballs record books.

In his 21 year career, the Big Train accumulated a total of 417 wins which is second all-time. He led the league in strikeouts 12 times and won at least 20 games in ten straight years during the 1910s. Johnsons 110 shutouts are unmatched in baseball history while his 531 complete games are fourth best.

His 3,508 career strikeouts were a record for 56 years until Nolan Ryan, Steve Carlton and Gaylord Perry eclipsed it in 1983. Johnsons final record tally was 417-279. He won the World Series in 1924 and was a two-time AL MVP.

He is part of the Major League Baseball All-Time team and the Major League Baseball Century Team. One as the Second Greatest Pitcher of All-Time only behind CY Young. In Baseballs first Hall of Fame class, Ty Cobb, Walter Johnson, Christy Mathewson, Honus Wagner, and Babe Ruth were inducted as five of the finest players of the era controlling the election ballots in 1936.

The seller is "brown3116" and is located in Seaford, Delaware. This item can be shipped to United States.