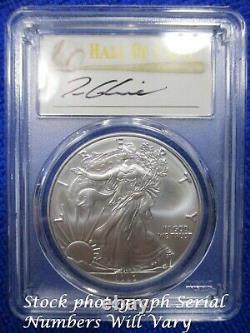 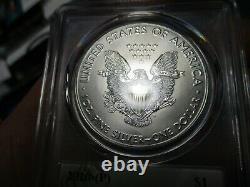 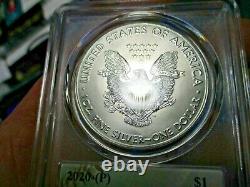 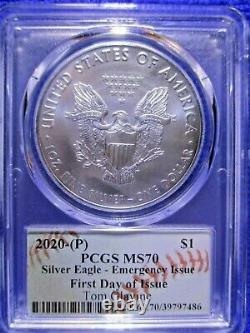 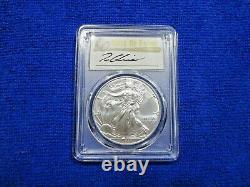 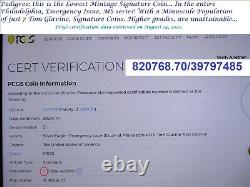 Pedigree: last year of issue for the 2020 design of the American Silver Eagle! Collectors on Edge for Coins in 2021. So far, collector reaction to the announcement of a Silver Eagle redesign has been mixed, largely because the new design has yet to be seen. As with any change, there are those who are already mourning the loss of the famous image.

Others, however, think that the current design has run its course and are looking forward to something new. Perhaps the most common reaction is a wait and see approach, which is common among those who are open to something new but are reserving judgment until they see what that is.

The new 2021, coin design sets up some new dynamics among collectors. For one, it sets up two types of Silver Eagles. This gives collectors the chance to close the book on a complete set of Silver Eagles if they choose to do so. Those who are new to collecting have the opportunity to start anew with the series without feeling a need to catch up by purchasing older editions. Some speculate that the redesign could increase demand in 2020 and increase demand for issues with the original design, but only time will tell if that is true.

24,000 coins, less than the 1916 D, Mercury dime! However, none of the Mercury dimes, attained a Sheldon grade, as high as the Glavine signature coin.... An excellent ASE coin, if you're building a signature set? Or just want to add "Low Signature Population Rarity" And collectible value, to an existing collection!

The West Point Mint closed for a couple of weeks, because of the CV-19, extenuating circumstances. Philadelphia mint produced 480 monster boxes, of American Silver Eagles, as Emergency Issues.

Therefore, the overall mintage of 240,000 gradable coins, will be substantially reduced! The Tom Glavine, Hall of Fame, American Silver Eagle.

Will be one of the most "Sought After" Signature Coins, for Coin Collectors, baseball memorabilia and autograph collectors... PCGS (EIN) Encapsulation Identification Number 820768.70/39797485. Restricted signature is: to be signed by recipient only. Are opened up under video and audio surveillance cameras. Accompanied by a signature eye witness. Tom Glavine never lit up the radar gun, so opposing batters often came to the plate anticipating a good at-bat.

But in most cases, those same batters trudged right back to the dugout victimized by a steely-eyed strike thrower who overwhelmed opponents with control and determination rather than speed. Born March 25, 1966 in Concord, Mass. And raised in the Boston suburb of Billerica, Glavine lettered in both ice hockey and baseball in high school.

He was selected in the fourth round of the 1984 National Hockey League entry draft by the Los Angeles Kings, but chose baseball when the Braves tabbed him with a second-round pick that same year. By 1987, Glavine was in the majors as the Braves assembled a young rotation including John Smoltz and Steve Avery that would power the franchise for years to come.

After losing a big league-worst 17 games in 1988, Glavine went 14-8 in 1989. Over the next 18 seasons, Glavine would post only three more losing records. In 1991, Glavine led the Braves to the National League West title a worst-to-first story for a team that finished last in 1990. Glavine was 20-11 with a 2.55 earned-run average and a league-leading nine complete games, earning the National League Cy Young Award.

He helped the Braves advance to their first World Series in Atlanta, where they fell to the Twins in seven games. It was the start of a stretch of 14 straight first-place finishes (in complete seasons) for the Braves, an all-time record.

Glavine became well known for his calm demeanor on the mound and his dogged refusal to give in to batters. He would paint the outside corner with pitch after pitch, expanding the strike zone ever so slightly throughout the game. He walked 1,500 career batters because he would not throw pitches down the middle of the plate even if he was behind in the count. The result was more than 5,800 base runners in 4,413.1 innings, but hardly any huge scoring outbursts that drove him from games. Glavine notched 20-win seasons in both 1992 and 1993, finishing second and third (respectively) in the Cy Young Award voting.

The Braves fell to the Blue Jays in the 1992 World Series, then lost to Philadelphia in the 1993 National League Championship Series. Glavine was 13-9 in the strike-shortened 1994 campaign, then was 16-7 in 1995 finishing third in the Cy Young Award voting. In the World Series, Glavine threw eight-shutout innings in Game 6 against a powerful Indians lineup, earning a 1-0 victory and wrapping up the Fall Classic title for the Braves.

He was named the World Series Most Valuable Player after going 2-0 with a 1.29 ERA. From 1996 through 2002, Glavine averaged almost 17 wins a season while earning another Cy Young Award in 1998 following his 20-6 campaign. Glavine won 21 games in 2000 and finished second in the Cy Young Award voting, all while maintaining his status as one of the games most durable pitchers.

From 1990 through 2007, Glavine started at least 32 games a season except for the 1994 and 1995 seasons that were shortened by the labor dispute. In that stretch, Glavine led the NL in starts six times, including four in a row from 1999 through 2002. Glavine left the Braves following the 2002 season, signing with their NL East rival the New York Mets. In five seasons in the Big Apple, Glavine won 61 games including his 300th win on Aug. 5, 2007, becoming just the 23rd pitcher (and fifth left-hander) to reach that plateau.

The next season, Glavine attempted a comeback from shoulder and elbow surgery in the minor leagues before being released on June 3, 2009, ending his big league career. At the time, he was the winningest active pitchers in the major leagues. Glavines career numbers: 305-203 with a 3.54 ERA and 2,607 strikeouts. He was named to 10 All-Star games, earned Cy Young Award votes in six seasons and won four Silver Slugger Awards as a pitcher.

His 682 games started ranks 12th all-time, and his 305 victories are fourth all-time among left-handers. Glavine was elected to the Hall of Fame in 2014. All high value dollar items.

Under video and audio surveillance equipment. Are opened up under video and audio surveillance cameras, accompanied by a signature eye witness. You may return items for any reason up to. Unless otherwise stated in writing on the item advertised for sale. The item "2020 P American Silver Eagle POP 7 ms70 TOM GLAVIN BASEBALL HALL OF FAME FDOI" is in sale since Tuesday, September 15, 2020. This item is in the category "Coins & Paper Money\Bullion\Silver\Coins". The seller is "eyecan-24" and is located in San Diego, California.

This item can be shipped to United States.