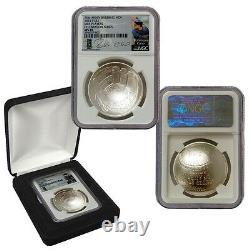 A small number of these historic silver dollars in perfect MS-70 condition have been set aside for the MLB Players Celebration Series, an exclusive collection officially licensed by the Major League Baseball Players Association. Each certified MS-70 coin is encapsulated along with a special certificate bearing the facsimile signature of one of baseballs top stars. Robinson Cano is a six-time All-Star and five-time Silver Slugger Award winner. He won two Gold Glove Awards and has been named Player of the Month twice.

In 2011, Cano won the Home Run Derby. He was a member of the 2009 World Series championship team and the Dominican Republic's 2013 World Baseball Classic championship team, for which he won the tournament's most valuable player award. Fewer than three percent of all Hall of Fame commemorative silver dollars have been graded and certified as perfect MS-70 by NGC, one of the leading coin certification services and just a fraction have been authorized for this series.