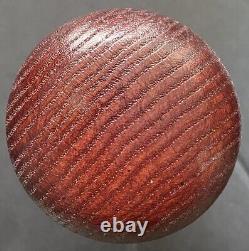 Full size 1988 National Baseball Hall of Fame Induction Bat. Features all five 1998 HOF inductees: Don Sutton, Larry Doby, George Davis, Lee MacPhail and Bullet Rogan. Don Sutton is best known for his time with the Los Angeles Dodgers; Larry Doby is best remembered as the first black player to play in the American League, and the second in the MLB after Jackie Robinson; George Davis played most of his career with the New York Giants and Chicago White Sox; Lee MacPhail was an executive for the Yankees and Orioles, as well as an American League president; and Bullet Rogan was a Negro league legend for the Kansas City Monarchs. Louisville Slugger official bat, made in Louisville, Kentucky. Dated July 26, 1998 to commemorate the date of the induction.

BE SURE TO BOOKMARK OUR SITE AS WE ARE CONSTANTLY ACQUIRING NEW & INTERESTING COLLECTIBLES WEEKLY. This item is in the category "Sports Mem, Cards & Fan Shop\Vintage Sports Memorabilia\Bats". The seller is "glorydayscollectibles" and is located in this country: CA.

This item can be shipped to United States, Canada.